After high school, her hard work paid off. She received a full scholarship for music and academics to Missouri Baptist University, but left after two years when her father was diagnosed with lymphoma, moving to Troy to lend support.

She worked as music director at her father’s church, while teaching voice and piano lessons, waitressing to make ends meet. Barnett met husband, Rochester Hills Mayor Bryan Barnett, while line dancing. “We both love to dance and wish we could do it more often,” she says. The couple wed in 2003 and had their first son a year later. Her father passed away a month after her first son was born, and then the couple had another son while she finished her degree at Rochester College. Barnett has been teaching voice and piano for 23 years, and her private Rochester Hills studio always has a wait list. Yet, somehow, she finds time to incorporate community giving into her routine.

“Being married to an elected official puts me in front of a lot of wonderful local charities,” she says.
“I was honored to be approached by The Rainbow Connection to record a Christmas album [November 2009].”

In all, 1,500 CDs were sold to benefit the organization.

“It was such a wonderful feeling to have that kind of success in such a short time that benefitted such an incredible cause,” she shares. (Download the album, “Just the Beginning,” on iTunes, along with the single “Let it Go.”)

Barnett is as versatile as she is talented, and her recent rap collaboration on “Anything You Want” with DJ Brady Gozza is testament to this. How does she juggle motherhood and her career? The answer is simple: priorities.

“It can be tricky,” she admits. “I have a lot of support around me … being a performer is a convenient career for a mom. I perform the majority of the time during ‘bedtime’ and I teach in my home.”

She invests in her sons by encouraging their musical endeavors and being present. She credits this lovable characteristic to her late father.

“I have had many mentors,” she says. “First and foremost, my mother and father not only raised me with the values that I am doing my best to instill in my children, but they also encouraged me musically. They didn’t have much, and they made sure I had the training to become skilled in my passion. For that, I am so grateful and forever indebted.”

While Corrin Roach Barnett and her brother were performing at Rochester’s swanky Royal Park Hotel one enchanted evening, Ellen Barkin and Sam Levinson happened by for cocktails. Struck by her vivacious personality and obvious talent, the actors invited her to join the cast of their 2011 film Another Happy Day. Before long, she was chatting it up with Ashton Kutcher about the Chicago Bears and inviting her new friends over for jambalaya.

Although the stunning brunette bombshell seems to have a Cinderella life, she is as down-to-earth and humble as the little girl who left the theater after watching Sister Act 2 with her family. “I walked out of that movie longing to be a singer,” she remembers. From then on, she had a haunting desire to be involved with music for the rest of her days.

Originally from a western suburb of Chicago, Barnett had a firm foundation built around faith and family. Her father, Jimmie Roach, was a mechanic and pastor at a small Christian church in Elgin, Ill., where her mother, Ranee, helped carry the message as well when she wasn’t working as a waitress or nail technician. Barnett began playing the piano and singing at age 5, and her older brother joined her, learning the drums. 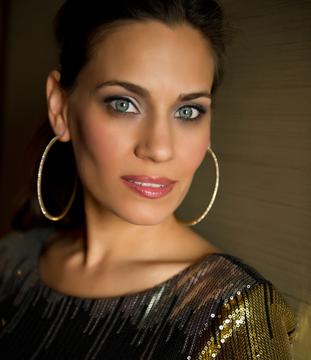 “My passion for music really developed in church,” she says. “I didn’t have much of an outlet other than that and school choirs.” Inspired by Lauryn Hill, Barnett developed her own voice as a result of her upbringing and innate ability to carry a melody.

“I find myself moved by the glimpses of gospel flare,” she says.